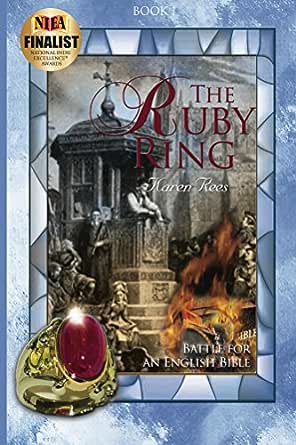 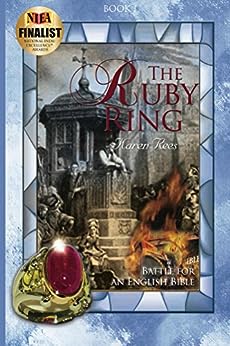 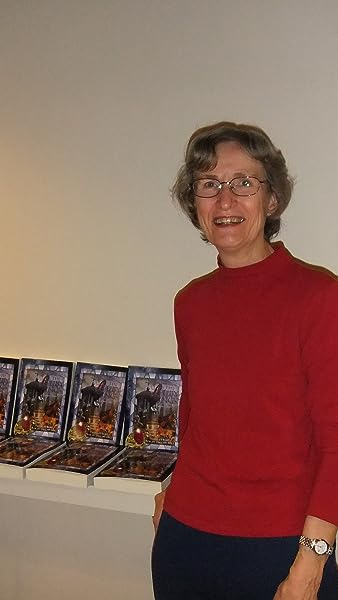 The Ruby Ring: Battle for an English Bible (The Reformation - A Family Divided Book 1) Kindle Edition

“Karen Rees grabbed my imagination from page one and did not let me return to the 21st century until I had finished the last paragraph! ….a significant, historical tale with the acute detail of an eyewitness....” Julie Gariss, preacher's wife and well-known speaker

2014 National Indie Excellence Award Finalist. THE BATTLE BEGINS. The year is 1524. William Tyndale makes the fateful decision to produce an English Testament without Church permission. He knows that a vernacular scripture will free the common people from spiritual domination by a corrupt and ignorant clergy. If Tyndale is caught, he'll die at the stake. So will anyone found assisting him. Owen Alton, a London grocer's heir, catches Tyndale's vision. But if he helps Tyndale, he'll be disinherited and lose Jane Horne, the minor-knight's stepdaughter he loves. Jane has defied her family in her desire to wed Owen. If he now should leave her for Tyndale.... As if she didn't have enough troubles, Jane discovers the shocking secret behind her mother's ruby ring.
See all Product description
click to open popover

A Net In Time
4.0 out of 5 stars Historically Accurate, good read
January 23, 2014
Format: Kindle Edition
Romance, mystery, history all rolled into one package. Well written, makes you want to read more to find out what happens. This is the book "The Ruby Ring".

I read this book, on behalf of Bookcrash.com, over a period of four days, each night staying up later to read it until finally last night I just HAD to finish it and so I stayed up quite late in order to do so. Karen Rees did a good job writing this book. Lots of historical detail a compelling story is told. I was impressed with how well the author brought to life the struggles that Tyndale had in bringing the English bible, and how divisive the whole process was.

The main character is Jane Horne and the relationships she had with various people, William Tyndale is a secondary character but we hear much of his struggles. Various events happen in Jane's life that further the story of getting Tyndale's English bible printed and available for the people.

One aspect I missed in this book that I've read in other historical fiction is what the true facts of the book are and where fiction took over. I always appreciate that in other historical fiction and had looked forward to that section but was disappointed that it wasn't there. It would be lovely if such a section where present in future books that Karen Rees might write.

Would I recommend reading it?
Definitely. :)
It was a good read. Provides good information that makes this part of history come to life. A nice way to learn this part of our past.
Read more
Helpful
Comment Report abuse
See all 2 customer reviews
Write a customer review

Patricia Bradley
5.0 out of 5 stars A book well worth your time!
March 28, 2019 - Published on Amazon.com
Verified Purchase
I'm not one to read historical fiction, but this book delves into a subject I find fascinating. It's the history of how we came to have an English Bible. Before Tynedale, only the church had access to God's word and in the 1500s the priests and clergy were corrupt. They did not want the common man knowing what God's Word said. If they did then the church would lose power and money. That sets the stage for intense conflict and this book delivers. Karen Rees has a poetic voice and gave a good feel for the era. It's not all history, but a good romance, as well. It's a book that I believe is well worth your time.
Read more

Cass Wessel
5.0 out of 5 stars Award Winning Story
May 13, 2018 - Published on Amazon.com
Verified Purchase
Now I know why this book won an award. It's an amazing story based on historical fact. While the book took a bit of time to grab me, I'm glad I persevered because it rapidly warps into a captivating page turner. The characters leap to life from the pages revealing a portion of history most people don't know and many could care less about. That's unfortunate. If ordinary people hadn't taken extraordinary risks to provide the world with the Bible written in the vernacular, modernity would never have become what it is. Instead, education would have been confined to the privileged few, personal freedoms would not exist, nor would democracy ever have been established. Of course, that's this reviewer's opinion. Feel free to disagree. People like Tyndale risked everything to give us that right.
Read more

Sara Goff
5.0 out of 5 stars A Quest for Love and Identity
July 12, 2014 - Published on Amazon.com
Format: Kindle EditionVerified Purchase
The Ruby Ring, an outstanding debut novel, is the story of a young man's calling to spread the teachings of William Tyndale in the midst of the Protestant Reformation. Owen Alton goes against his father's plans, his fiancée's wishes, the Church, and the King's law to fulfill a sense of purpose and a deep yearning to know and follow Christ.

This historical novel set during the 16th Century revels in the details of manors and markets, bookshops and fairs, without diverging from the storyline. I felt unknowingly transported into the time period, swept up in the changing winds blowing over the English countryside, only stopping occasionally to reread a beautiful sentence.

The Ruby Ring becomes a page-turner as Owen goes deeper into the smuggling of Tyndale's writings. My stomach clenched when he's forced to choose between Jane Horton, the woman he's been fighting family and tradition to marry, and his spiritual calling. The day he turns his back on England to follow Tyndale to Germany, Jane gives him her ruby ring and the mystery behind it starts to unfold.

Jane, a childhood friend of Owen's, is a lovable and fully-developed character whose search for identity parallels Owen's quest for purpose. Perhaps my only complaint is for more insight to Tyndale's teachings and how they affect Owen spiritually. Rees has clearly done her research, however, and is passionate about the subject. She is a confident writer and story teller. I hope there will be a second novel out soon!
Read more
One person found this helpful

Amazon Customer
5.0 out of 5 stars The Ruby Ring, by Karen Rees - Review
February 7, 2014 - Published on Amazon.com
Format: Kindle EditionVerified Purchase
I found reading this book to be a pleasure. It was well written. I felt comfortable living in Tudor England in the 1500's with the author telling me the love story of Jane and Owen, while she familiarized me with the customs, values, and especially the controversy between the church of England and dissenters, Martin Luther and William Tyndale, whose influence changed many of England's people, its church, and eventually, the religious views of others around the world. An unexpected turn in the story caused me to gasp and wonder what would happen next. The tension is tight as danger and romance equally escalate throughout the pages of The Ruby Ring.
Read more
2 people found this helpful

Emily A. Combs
5.0 out of 5 stars I highly recommend "The Ruby Ring" to you
April 8, 2015 - Published on Amazon.com
Format: Kindle EditionVerified Purchase
This book surprised me with the depth of character development, the historical setting and subject. One of the things that drew me to read this book was the subject matter. I now have greater insight of life then, the challenges and the bravery of people during that time who wished to make the Word of God available to read. For me, learning wrapped in a story, is a much easier way to learn, and lasts longer. I commend the authoress for ability to write this book. I highly recommend "The Ruby Ring" to you. I am looking forward to the Sequel already written. Thank you, Karen Rees!
Read more
One person found this helpful
Go to Amazon.com to see all 40 reviews 4.4 out of 5 stars
Fast, FREE delivery, video streaming, music, and much more
Prime members enjoy Free Two-Day Shipping, Free Same-Day or One-Day Delivery to select areas, Prime Video, Prime Music, Prime Reading, and more.
> Get started
Back to top
Get to Know Us
Make Money with Us
Amazon Payment Products
Let Us Help You
EnglishChoose a language for shopping. CanadaChoose a country/region for shopping.
© 2008-2020, Amazon.com, Inc. or its affiliates