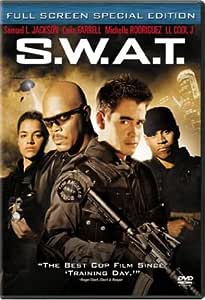 Two wisecracking, battle-hardened veterans (Samuel L. Jackson and Colin Farrell) team up with a pair of street-smart rookies (Michelle Rodriguez and LL Cool J) to form the most freewheeling - but effective - S.W.A.T. team ever. Their first assignment: transport an international drug kingpin into federal custody - after he's offered $100 million to anyone who will free him!

4.6 out of 5 stars
4.6 out of 5
1,089 global ratings
How are ratings calculated?
To calculate the overall star rating and percentage breakdown by star, we don’t use a simple average. Instead, our system considers things like how recent a review is and if the reviewer bought the item on Amazon. It also analyzes reviews to verify trustworthiness.
Top reviews

Bob C.
5.0 out of 5 stars Solid Series - Ended too soon
Reviewed in Canada on July 23, 2019
Verified Purchase
Great 70's cop show! So great, it has been re-visited and a new version is currently on the air (2017-present).
Just love watching everybody run past Volkswagen bugs and vans on their way to a payphone to save the day!
Just love it!
Read more
2 people found this helpful
Helpful
Comment Report abuse

Stephen A. Gambling
5.0 out of 5 stars S.W.A.T.: The Complete Series. A Very Entertaining Series!
Reviewed in Canada on May 4, 2018
Verified Purchase
S.W.A.T.: The Complete Series, brings back the action I remember from a super police action TV series! The theme to S.W.A.T. is very recognizable. Even though the series did not run a long time, each episode is action non stop throughout! I will watch the episodes again!
Read more
3 people found this helpful
Helpful
Comment Report abuse

Reuben
3.0 out of 5 stars Corny old tv show but the service was good
Reviewed in Canada on October 9, 2020
Verified Purchase
Corny old tv show, kind of interesting to view through the lens of modern police violence. thought for the price I might as well check it out. Worth it if you're a huge Robert Urich fan but otherwise I'd pass.
Read more
Helpful
Comment Report abuse

Baerg
5.0 out of 5 stars Old but good
Reviewed in Canada on November 7, 2018
Verified Purchase
Sure is nice to see men act like men . I know it's old but good
Read more
3 people found this helpful
Helpful
Comment Report abuse

Paula
5.0 out of 5 stars great series
Reviewed in Canada on August 4, 2019
Verified Purchase
this series plays really well. while some of the episodes are laughable. on the whole it is not bad.
Read more
One person found this helpful
Helpful
Comment Report abuse

john
5.0 out of 5 stars oldies but goodies
Reviewed in Canada on June 28, 2019
Verified Purchase
good to watch it again remember when it first came out loved the show
Read more
One person found this helpful
Helpful
Comment Report abuse

Dean S.
5.0 out of 5 stars No scratches or any damage
Reviewed in Canada on September 6, 2018
Verified Purchase
Received before time expected,everything in order and not damaged.
Thank you
Read more
2 people found this helpful
Helpful
Comment Report abuse

Shinobi
5.0 out of 5 stars Ubelievable... the whole series, one box
Reviewed in the United Kingdom on January 11, 2019
Verified Purchase
Great to finally get the whole series of this classic show, and in one box, and at a bargain price. Definitely worth getting. I used to have the first series box-set but ended up giving it away and when trying to re-buy it, the price was ridiculous. This is the perfect solution.
Read more
2 people found this helpful
Report abuse

LMK
3.0 out of 5 stars Decent action fun
Reviewed in the United Kingdom on November 26, 2012
Verified Purchase
This film is the story of a police officer (Farrell) who is kicked off SWAT due to a reckless partner. He then eventually gets back in - cue the montages of recruiting officers and then training. Eventually the new team prove themselves and become involved in the capture of a notorious criminal offering a huge payout to anyone breaking him out.

There are a lot of cliches - such as the hero's girlfriend reluctantly leaving him, the irate police captain ranting at the reckless-yet-brave officers, the renegade and so on - and all the machismo posturing means it's not exactly brain-taxing, but this is still an enjoyable action film. There are a couple of funny lines, the action ramps up well, Samuel L Jackson is always good value for money, and Jeremy Renner is on fine "evil" form as the baddie. Worth a watch, but I'd say buy second-hand or rent rather than rush to own it.
Read more
Report abuse

Halcyon Scarlet
3.0 out of 5 stars The first has the stars, the second has the story.
Reviewed in the United Kingdom on May 21, 2012
Verified Purchase
They're pretty good if you think of them like TV movies.

I found SWAT Firefight to be better than the first.

The first was a waste of the talent to be honest. And you want it to be good, but it's just not, really. The second is actually good for what it is. I admit I enjoyed Firefight, it's not perfect, but it is more interesting and a lot less predictable. Firefight probably had a lower budget than the first, but I think they made it work harder.

It's a nice package of films for when you want to watch some light entertainment action films. Which is what the 3 stars are for, if you're looking for films you would compare amongst the best, then this package is going to score much further down the scale.
Read more
One person found this helpful
Report abuse

C. J. Haywood
5.0 out of 5 stars the film itself
Reviewed in the United Kingdom on March 12, 2019
Verified Purchase
a brilliant film thoroughly enjoyed it and if the series of swat is as good as the film then I have made a good purchase