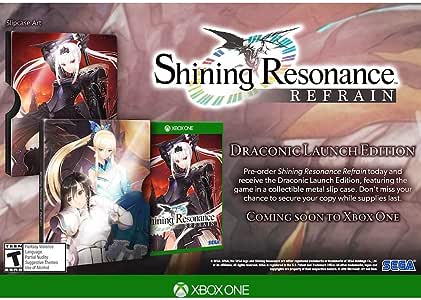 "Fans who pre-order Shining Resonance Refrain on PS4, Xbox One, and Nintendo Switch, will receive the game in a collectible metal slipcase, featuring character artwork of Excella, Sonia, and Kirika. Shining Resonance Refrain remasters the original Shining Resonance, previously released on PlayStation 3 only in Japan, and features dual audio with English and Japanese voices. In addition to all of the original’s DLC, now included as part of the base Original Mode, Shining Resonance Refrain packs a new Refrain Mode, unlocking the Imperial Princess Excella and Dragonslayer Jinas as party members for a new experience – just be sure to save this for your second play through to avoid any spoilers! With real-time action combat, it will be important to utilize each party member’s unique abilities and strengths while deepening relationships with each character. Through events and dates, get to know your party members to unlock their full potential on the battlefield! Depending on the bonds of the characters, Resonance may occur between the characters, providing a new level of support and leading to victory. Yuma has the soul of the Shining Dragon within him, transforming into the ancient beast by unleashing the power conducted through his sword. Dragons, long thought to be extinct, make Yuma a target for the Empire. To use him against the Kingdom of Astoria, the Empire captures Yuma. Sonia, Princess of Astoria, launches a rescue mission with the help of the Dragoneers. Hearing about the plight of Astoria and their fight to save their land, Yuma decides to aid them. Typically timid, will he find the courage to realize the strength he has within him? "

Page 1 of 1 Start overPage 1 of 1
This shopping feature will continue to load items when the Enter key is pressed. In order to navigate out of this carousel, please use your heading shortcut key to navigate to the next or previous heading.
Back
Next
Customer Questions & Answers
See questions and answers

4.3 out of 5 stars
4.3 out of 5
52 global ratings
How are ratings calculated?
To calculate the overall star rating and percentage breakdown by star, we don’t use a simple average. Instead, our system considers things like how recent a review is and if the reviewer bought the item on Amazon. It also analyzes reviews to verify trustworthiness.
Top reviews

Mario M.
4.0 out of 5 stars By the numbers, but I love the math
Reviewed in the United States on August 11, 2018
Platform for display: Xbox OneEdition: Draconic LaunchVerified Purchase
I have gone through the game once and I think I've gone through enough to have a solid opinion on the game that I think is worth sharing.

Combat:
Once you have a grasp on the controls and what it is you can do, the combat largely becomes repetitive and contains little challenge. There are huge difficulty spikes from time to time though and while the game gives you warnings via speech bubbles that what you are about to fight is really tough, these tough battles are disappointing. The difficulty usually comes from the oldest trick in the game design book: the enemies are damage sponges that have huge AoE attacks that are nearly instant kills. *shrug*

However, it's not all bad. There is enough variation in enemy design (most are visually appealing) to make you want to discover more and the ability to do combos by mixing up your regular attacks, magic, etc keeps the combat from being a total grind. Furthermore, if you feel compelled to, you can switch up your active character which will mix up the controls and your strategies a bit.

A personal pet peeve of mine that this game does a couple times is put you into fights , sometimes only seconds long, that you have to lose or otherwise have no control over, for the sake of story. It's silly. Speaking of which...

Story:
This game is so contrived, obvious, and cliche that it's laughable. In fact, the story really only makes sense in the context of being self aware. Characters will say things or make decisions that on the surface and in the moment seem utterly absurd and more than likely would (and should) lead to absolute disaster. Spoiler alert: it never does. It's like the characters are using a strategy guide and know what is going to happen. If you want to really stretch, maybe you can convince yourself that the good guys find the antagonists as goofy as you do and are willing to take their chances. The bad guys talk smack like they are gods, but you beat them down so often, so efficiently, and most of the time just let them walk away after a battle, they may as well be team rocket.

So do I hate it? Actually, no. Sure, it's dumb, but it's fun. The characters are likeable, for the most part, and the fact the game can revel in its contrivances is enjoyable in itself.

A major downside is that in Refrain mode the two characters that are added to your party are almost like figments of the main character's imagination. They are originally huge parts of the story, but the fact that they are in your party doesn't change the anything at all, and their 'real versions' will go through the story exactly the same. They are interesting fighters though and absolute terrors in combat, but this makes an already easy game that much easier, so using them both in combat feels cheap.

They do have date scenes and dialogue and while I understand that for them to be relevant in the plot would require the story to be almost entirely rewritten, it's no less disappointing and Sega doesn't get too many points just for the attempt when they only got to maybe 40% of what I was expecting.

Characters and Waifus:
Let's cut to the chase here: the dating is why you are interested in this game and you'll be happy to know the game provides you with a rogues gallery of waifu options. All the characters are interesting for the most part and I fully anticipate playing through the game multiple times to romance pretty much everyone. (Update: You don't have to do multiple playthroughs to romance everyone. Other than specifically choosing to give everyone a romantic trait that makes them incompatible in battle, there's no jealousy mechanic that you need to worry about).

The only gripes I have are that, one, you'll sometimes have to replay the same dialogue scenes over and over , which is kinda dull.
Secondly is that the guy you are meant to empathize and role play as, Yuma, is such an unlikable character for a good chunk of the story. He is a whiny and ineffectual baby and it gets old really fast. A couple times he even has to have conversations with the voice in his head (seriously) about how, if he's not busy at the moment, maybe he can prevent his waifus from being slaughtered or captured.
Come on, dude-bro, get with the program and as I said, since a lot of times characters act as if they know what the outcome is, it's bizarre for Yuma to be the only one not to do so and to be so wimpy. At the same time, everyone falls madly in love with him almost instantly which often makes the relationships feel forced, to say the least.
Eventually he does start acting more appropriate though so it becomes less of an issue as the story goes on.
Someone might argue that is the point, his character growth from zero to hero, but it's done so poorly that I wouldn't count it as being present. Rather than growth it's more like a switch was flipped and Yuma is suddenly the biggest hero to have ever lived when two seconds ago he was not.

Soundtrack:
Other than a handful of the more cutesy battle tracks, the soundtrack is entirely forgettable and the J-pop that you can trigger during battle via the BAND system feels utterly bizarre. At least to me.

Side quests:
Probably the least interesting aspect of this game. Other than the fact that you'll want to do them to get some materials needed for item and aspect systhesis, there's no depth to these and they simply repeat endlessly.

Outfits:
Yeaaaaaahh.....none of them are appropriate battle attire, haha. Every female character has about seven swimsuits. If you're in the mood to play a game with an all female party fighting virtually naked, well, lucky you, the game has you covered. Personally, I would have preferred a little bit more imagination put into them. Maybe some references to other Sega properties? But, that's neither here nor there.

Final opinion:
This game is what you would expect it to be. No more, no less. Competent enough mechanically to function and just interesting enough to make you want to play more and see what's next. The character relationships are what is going to keep you coming back and while they aren't particularly deep stories of romance, they work.
Read more

JRPG Fan
4.0 out of 5 stars Over the top Japanese fan service action rpg
Reviewed in the United States on August 3, 2018
Platform for display: Xbox OneEdition: Draconic LaunchVerified Purchase
This game is really fun. I've ended up spending most of my time going on dates and having night talks though, doing side quests, rinse repeat.
Bonds are very confusing and their impact is unknown (...at my point in the game at least)

The character outfits have gotten me in trouble with the wife, so good job!

Overall I recommend
Read more
7 people found this helpful
Report abuse
See all reviews
Fast, FREE delivery, video streaming, music, and much more
Prime members enjoy Free Two-Day Shipping, Free Same-Day or One-Day Delivery to select areas, Prime Video, Prime Music, Prime Reading, and more.
> Get started
Back to top
Get to Know Us
Make Money with Us
Amazon Payment Products
Let Us Help You
EnglishChoose a language for shopping. CanadaChoose a country/region for shopping.
© 2008-2020, Amazon.com, Inc. or its affiliates