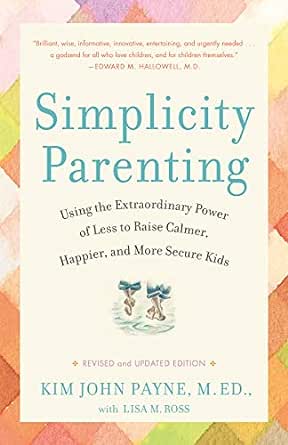 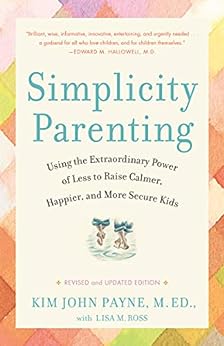 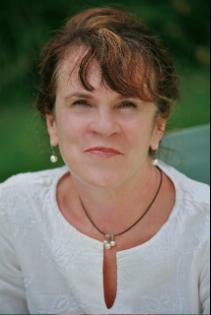 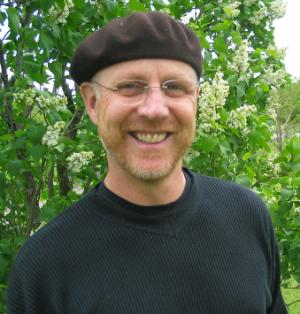 We are facing an enormous problem in our lives today. It’s so big we can hardly see it, and it’s right in front of our face, all day, every day. We’re all living too big lives, crammed from top to toe with activities, urgencies, and obligations that seem absolute. There’s no time to take a breath, no time to look for the source of the problem.”

—Sarah Susanka, The Not So Big Life

James was about eight years old, and entering third grade, when I met his parents. Lovely and very bright people, James’s mother was a professor and his father was involved in city government. They were worried about their son having trouble sleeping at night, and his complaints of stomachaches. An eight-year-old boy is fairly well designed to be a picky eater, but James’s pickiness was getting extreme. His stomachaches came and went, but they didn’t seem food related.

Both parents spoke proudly of how confidently James could speak with adults, but acknowledged that he had trouble connecting with his peers. He avoided things that he felt might be dangerous, and had only very recently learned to ride a bike. “And don’t forget the driving thing,” his mother mentioned. James’s father explained that whenever they drove someplace, James would be the self-appointed policeman in the backseat, letting them know when they were even one or two miles above the speed limit, scanning the road ahead for concerns of any kind. The term “backseat driver” didn’t come close to describing his behavior; you can well imagine how relaxing these road trips were.

As I got to know the family, I noticed how much their daily lives were colored by world issues. Both parents were avid news followers. The television was often on and tuned to CNN, whether they were directly focused on it or not. Politically and intellectually oriented, they would discuss issues at great length, particularly environmental concerns. From an early age, James had been listening to these conversations. His parents were proud of his knowledge. They felt that they were raising a little activist, a “citizen of the world,” who would grow up informed and concerned.

James’s understanding of global warming seemed to rival Al Gore’s. That much was apparent. James was also, clearly, becoming a very anxious little fellow. His parents and I worked together on a simplification regime. We made some changes in the home environment and greatly increased the sense of rhythm and predictability in their daily life patterns. But our primary focus was on cutting back James’s involvement in his parents’ intellectual lives, and his access to information.

How much information was pouring into the house and into James’s awareness? Instead of three computers in the house, his parents decided to keep one, in the den off the master bedroom. After much discussion, they actually removed both televisions from the home. They felt that this might be harder on them than it would be on James, and they wanted to test their theory. If there were to be sacrifices, they wanted to bear their share of them. They also realized that the TVs had become mainly sources of background noise in their home. Would they be missed or not? Game Boys and Xboxes were also removed, minimizing the number of screens throughout the house.

I was most impressed, however, by the commitment they made to change some very ingrained habits. Quite bravely, I thought, they aimed to keep their discussion of politics, their jobs, and their concerns to a time after James went to bed. This was hard to do at first, and they had to remind each other frequently to refrain from talking about these things while James was still awake. But the change became second nature. The quality of their nightly talks intensified, and both parents came to really appreciate this time together because it was exclusively theirs.

James’s parents noticed changes in him within the first couple of weeks. His level of anxiety went down, and his sleep improved. He started coming up with ideas for projects, and things to do that wouldn’t have interested him previously. It was spring, and the weather was outstanding. Was that it? his parents wondered. At first they weren’t sure, but the trend continued. He was definitely mucking about more, getting involved in building things, catching lizards, digging holes. Within about three or four weeks’ time, James’s teacher also reported changes in him. As his play life expanded, his pickiness about food waned. He started interacting with some of the kids in the neighborhood, particularly one with whom a friendship blossomed. I’ve stayed in contact with this family, and the friend James made when he was going on nine has remained a lifelong buddy. The boys are in their early twenties now, still close and very supportive of each other.

Was all of this directly attributable to the changes James’s family made? Was it the lack of TV? Less talk of global warming? Can we point to any one thing that made the real difference? My answer to that would be no, and yes. I don’t think there was any one thing, any magic bullet that obliterated James’s nervousness and controlling behaviors. But the steps taken to protect James’s childhood definitely had an effect on him and his parents, an effect greater than the sum of their parts. James’s family environment was altered; both the landscape and the emotional climate of their daily life together changed. His parents brought a new awareness to their parenting, and that continued to serve them. It became the new measure of what did or didn’t make sense in their lives. They no longer felt that James had to know everything they knew, or care about everything that concerned them. In acknowledging and protecting that difference, they gave James the freedom to be more deeply and happily his own age.

When you simplify a child’s “world,” you prepare the way for positive change and growth. This preparatory work is especially important now because our world is characterized by too much stuff. We are building our daily lives, and our families, on the four pillars of too much: too much stuff, too many choices, too much information, and too much speed. With this level of busyness, distractions, time pressure, and clutter (mental and physical), children are robbed of the time and ease they need to explore their worlds and their emerging selves. And since the pressures of “too much” are so universal, we are “adjusting” at a commensurately fast pace. The weirdness of “too much” begins to seem normal. If the water we are swimming in continues to heat up, and we simply adjust as it heats, how will we know to hop out before we boil?

I sincerely believe that our instinct to protect our children will be what motivates us to change. Our impetus out of the proverbial pot will be our desire to protect their childhoods. Even as our own inner voices are silenced by the urgencies and obligations of so much stuff, our instincts as parents still give us pause. We stop short— occasionally or often, depending on how sped up our lives have become— and wonder how this pace is affecting them. Inner alarms are sounded when we confront the huge disconnect between how we believe childhood should be, and how it has become.

Such a moment happened to Canadian journalist Carl Honoré, and was the inspiration for his 2006 book In Praise of Slowness. An admitted “speedaholic” himself, Honoré got the idea for his book in just such a moment of great parental alarm. In an airport bookstore while traveling, Honoré saw a series of books called One Minute Bedtime Stories. His first impulse was to buy the whole series and have it shipped, immediately, to his house. In that momentary flash he was remembering the many times when he had been reading to his two-year- old son (“Read it again, Daddy!”) while thinking about unanswered emails and other things he needed to do. The notion of a one-minute story seemed perfect; wouldn’t a few of those each night do the trick? But fortunately, he had a follow-up feeling just as quickly, a sense of alarm and disgust that he—as with so many of us—had reached this point in our mad rush through life. What was this saying, and doing, to our kids?

We all have these moments of alarm, don’t we? I know that I do. We’re confronted with the often simple requests of these small beings (whom we love immeasurably), and yet their pleas seem to be coming from a galaxy far away, from the planet “slow.” The two- or three-year-old asking for the same story to be read again and again becomes an eight- year-old who wants to tell you the plot of a movie in such remarkable detail that the retelling will surely take longer than the movie itself. You’ve figured out a complicated car-pool schedule that requires split-second timing, but saves you a roundtrip or two per week. The whole enterprise grinds to a halt each morning around two laces that will not be tied, or one head of hair that cannot be brushed, or one backpack that is always—but always—missing something.

The genesis for this book came with a professional sense of alarm, though my insight evolved more slowly than Honoré’s bookstore revelation. I’m sorry to say it took me well over a decade to fully realize what I had been sensing for a long time. In my late twenties, I completed my training with social services in my home country of Australia, and I volunteered to work with children in Asia at two refugee camps, one in Jakarta, and one in Cambodia, along the Thai- Cambodian border.

In Jakarta the camps were very large, populated by several hundred thousand people who had been dispossessed by political instability. The camps operated like little fiefdoms, with... --This text refers to an out of print or unavailable edition of this title.

"Brilliant, wise, informative, innovative, entertaining, and urgently needed . . . a doable plan for providing the kind of childhood kids desperately need today!" ---Edward M. Hallowell, M.D., author of The Childhood Roots of Adult Happines --This text refers to an out of print or unavailable edition of this title.

Kim John Payne, M.Ed., is the director of the Waldorf Collaborative Counseling Program at Antioch University New England and a partner of the Alliance for Childhood in Washington, D.C.

Lisa M. Ross is a writer who lives in Stuyvesant, New York.

Arthur Morey has recorded over two hundred audiobooks in history, fiction, science, business, and religion, earning a number of AudioFile Earphones Awards and two Audie Award nominations. His plays and songs have been produced in New York, Chicago, and Milan, where he has also performed. --This text refers to an out of print or unavailable edition of this title.

Page 1 of 1 Start overPage 1 of 1
Previous page
Next page
click to open popover
Fast, FREE delivery, video streaming, music, and much more
Prime members enjoy Free Two-Day Shipping, Free Same-Day or One-Day Delivery to select areas, Prime Video, Prime Music, Prime Reading, and more.
> Get started
Back to top
Get to Know Us
Make Money with Us
Amazon Payment Products
Let Us Help You
EnglishChoose a language for shopping. CanadaChoose a country/region for shopping.
© 2008-2020, Amazon.com, Inc. or its affiliates