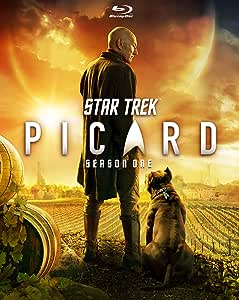 Star Trek: Picard features Sir Patrick Stewart reprising his iconic role as Jean-Luc Picard, which he played for seven seasons on Star Trek: The Next Generation. The new series will follow this iconic character into the next chapter of his life.

Scenes from the show

4.4 out of 5 stars
4.4 out of 5
16 global ratings
How are ratings calculated?
To calculate the overall star rating and percentage breakdown by star, we don’t use a simple average. Instead, our system considers things like how recent a review is and if the reviewer bought the item on Amazon. It also analyzes reviews to verify trustworthiness.
Top reviews

Gis A. Bun
TOP 500 REVIEWER
5.0 out of 5 stars Nice beginnings
Reviewed in Canada on October 13, 2020
Verified Purchase
I know a couple of people who mentioned that the character development was missing a bit. I don't know. We see how each member of the crew joined the crew with what they can do.
I've always found it strange that considering the series was primarily streamed [although on TV in Canada], there are deleted scenes. I'm not sure why would you remove a minute worth of footage if streamed [not all episodes have deleted scenes - some of which could of been left in - and some have maybe 5 minutes worth].
Each episodes has a "log" which gives some background to that episode.
There are also some further featurettes.
Note that [at least in my copy] there was just English in 5.1 and English subtitles.

Amazon Customer
5.0 out of 5 stars Absolute Treat for TNG fans!
Reviewed in Canada on October 12, 2020
Verified Purchase
This tv series is an absolute treat for the true Next Generation and general Star Trek Fan!

Even if you simply like Sci-Fi, you'll probably love this, however, knowing the history of these characters help greatly.

Lots of great cameos from other Star Trek shows as well. Fair amount of references, and tons of easter eggs for the die hard fan to catch.

Skuzzy
2.0 out of 5 stars Goodbye Romulans.
Reviewed in Canada on September 17, 2020
Star Trek is something very near and dear to me. I recently discovered Star Trek in the last 3 years, absolutely falling in love with the Deep Space 9, and The Next Generation, and even the original series. That being said, this series feels nothing like Star Trek.

First, the major problem this show runs into immediately is lack of information and poor presentation. Star Trek: Picard plays out on the assumption you have read the supplementary prologue book (I did; it was great!), but does nothing to fill viewers in on the connections. This is most prevalent when discussing Synths, and the Mars incident which hold no water and seem to have no relevance to the plot involving relief for the collapsing Romulan Star Empire.

Secondly, Romulans...Are now just humans with pointy ears. Their pointedly yellow skin is gone, now they're just asians, black guys, white people and every other demographic. They're not aliens anymore. They're human ethnic groups with pointy ears. Their cultural aspects, such as their paranoia and seeking privacy -- that's all gone. Now random romulans just TRUST the Federation media.

Acting....It's wooden. It's really bad. Certain characters are great; like Jean Luc Picard, but the supporting cast delivers their lines with no inflection to their voice and robotically. The first episode is basically an episode of Sir Patrick Stewart acting in a cast full of mannequins who deliver their lines like robots. It's pathetic.

Editting... Makes no sense. Episode 3 is the best example...
So envision this scene:
Guy bashes bottle over dudes head. Gets his ass kicked. Cut.
Woman kicks dude ass coming in through same door guy who got his head smashed in with bottle: gets rifle from guy, shoots him. Cut....

Next guy enters through the same door (3 guys entering from the same doorway; these are apparently special forces), KNOCKS WOMAN ONTO FLOOR WITH RIFLE. CUT.

wheelguy
5.0 out of 5 stars I love this show
Reviewed in Canada on October 6, 2020
Verified Purchase
If you haven't seen Stat Trek Picard you really should, its funny, smart and a bit sad.
Read more
2 people found this helpful
Helpful
Comment Report abuse

Bobby Harrington
5.0 out of 5 stars Very enjoyable
Reviewed in Canada on October 15, 2020
Verified Purchase
It's not nexgen but I'm enjoying this Picard and enjoying the story line and can't wait to see what's in store for the 2nd season
Read more
One person found this helpful
Helpful
Comment Report abuse

Terry Carroll
4.0 out of 5 stars “Picard” means Star Trek
Reviewed in Canada on September 23, 2020
I found this to be an immensely enjoyable show which has carried on the fine traditions of Star Trek. I pre-ordered this set as soon as it became possible, and can’t wait to see the episodes again.
Read more
5 people found this helpful
Helpful
Comment Report abuse
See all reviews
Fast, FREE delivery, video streaming, music, and much more
Prime members enjoy Free Two-Day Shipping, Free Same-Day or One-Day Delivery to select areas, Prime Video, Prime Music, Prime Reading, and more.
> Get started
Back to top
Get to Know Us
Make Money with Us
Amazon Payment Products
Let Us Help You
EnglishChoose a language for shopping. CanadaChoose a country/region for shopping.
© 2008-2020, Amazon.com, Inc. or its affiliates