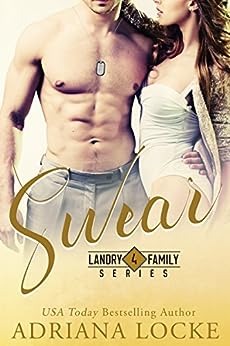 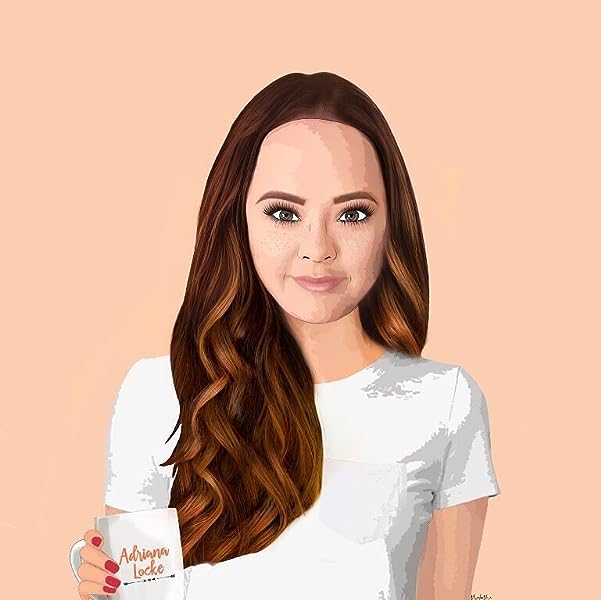 USA Today and Amazon Top 10 Bestselling author Adriana Locke lives and breathes books. After years of slightly obsessive relationships with the flawed bad boys created by other authors, Adriana has created her own. She resides in the Midwest with her husband, sons, and two dogs. She spends a large amount of time playing with her kids, drinking coffee, and cooking. You can find her outside if the weather's nice and there's always a piece of candy in her pocket. --This text refers to the paperback edition.

4.6 out of 5 stars
4.6 out of 5
169 global ratings
How are ratings calculated?
To calculate the overall star rating and percentage breakdown by star, we don’t use a simple average. Instead, our system considers things like how recent a review is and if the reviewer bought the item on Amazon. It also analyzes reviews to verify trustworthiness.
Top reviews

tania
4.0 out of 5 stars Down memory lane
Reviewed in Canada on May 20, 2017
Verified Purchase
So Ford is Aaaaamazing . Ellie is guarded and trying to preserve her self .
What do you do when the heart wants what the heart wants ? You go it and find your rainbow .
This book is very Landry oriented and I loved it .
Read more
Helpful
Report abuse

Kindle Customer
5.0 out of 5 stars Love love love it
Reviewed in Canada on June 23, 2017
Verified Purchase
What can I say? I don't think I've read a book by Adriana Locke that I didn't love. Especially one about the Landry's! Ford's persistence kept me entertained. I can't wait to read Swink!
Read more
Helpful
Report abuse

tammy
5.0 out of 5 stars Great book
Reviewed in Canada on June 13, 2017
Verified Purchase
Another great Landry book, how can u not fall in love with theses boys and their women.
Read more
Helpful
Report abuse

Sophie Koufes
5.0 out of 5 stars Second Chance Romance At Its Best!
Reviewed in Canada on August 26, 2018
Audio Version Review: These books in this series just become more real and part of your heart the more you listen to their stories. Ford Landry and Ellie Pagan's second chance is so beautiful and sweet. You need your tissue box next to you with this one. I love the cameo appearances of the Landry Family's & significanct others. I absolutely love listening to this series as the duel naration is perfect as they are able to create and capture the different emotions of the character's perfectly. Wen Ross is my favourite male narrattor. I cannot wait to listen to the next novel in this series. I'm so highly addicted to listening to this series. Fabulous story and narrative so worth a listen.
Read more
Helpful
Report abuse

Ash Lake
5.0 out of 5 stars Oh Ford........swoon!
Reviewed in Canada on May 15, 2017
With every Adriana Locke book, she easily draws me into the story and the lives of the characters. But with the Landry family and with every book, I become more and more drawn into this family. Through Barrett, Linc and Graham I've laughed, loved, laughed again (c'mmon it's Linc!) and started to get really excited for the final brother to finally get his story. Oh Ford....you were worth every second!

The story of him and his love Ellie goes back many years and with my weakness for second chance romance, this was perfect in every way. I rooted for them so much....I think I yelled at my kindle at one point...yeah that definitely happened! The love that never died was hidden deep beneath Ellie's pain and Ford....oh it was never pushed aside. His love is fierce, deep and oh so powerful. He's so different from his brothers and I LOVE that about him. And Ellie, I wish I could give her a huge hug. She's been through alot over the years and finally having Ford back in her life was exactly what she desperately needed. I will say I will never look a rainbow again without thinking about these two.

Of course we heard from the rest of the family....how could we not?! It's the Landry's! And the bits and pieces of Camilla and Sienna we heard have me RIDICULOUSLY excited for their books. Camilla's hiding something and I cannot wait to read about it. It's time for the sisters to get their HEA's.....and the reactions of the boys will be priceless. I'm sad knowing we're nearing the end of this family's story but knowing the author, she's going to knock our socks off!
A definite top read of the year for me! 5 Picasso Stars ;)
Read more
Helpful
Report abuse

Catherine Imbeault
4.0 out of 5 stars Ford is possibly my favourite Landry yet
Reviewed in Canada on May 25, 2017
I received an ARC of this book from the author via Give Me Books in exchange for an honest review. Thank you Adriana Locke and Give Me Books!

Ford is possibly my favourite Landry yet. He is dirty minded (like me), super sweet and just simple. He isn't one for the frivolous things in life. It's what he likes most about Ellie.

Ellie is such a great role model and female lead. She's a bit of a tomboy, but she's sweet as peaches (is that an actual saying? My brain just thought of it and thought is was a saying, and now I'm doubting myself) I love how Locke broke from the feminine, girly, trope that tends to repeat itself in romance novels. Finally a woman who likes fishing! (Because I do!)

Locke's writing never seizes to improve. There were some sad and emotionally intense scenes in here that did make my eyes water. I'm glad that she never stops pushing herself as an author in her books, and explores her "limits" - more like her "imaginary limits".

Overall, probably my second favourite Locke book so far. It's definitely catching up to Sacrifice! Can't wait to see what the next one will have in store for us!
Read more
Helpful
Report abuse

Colleen Mc (The Book Lover Blog)
5.0 out of 5 stars A passionate and humorous second chance romance!
Reviewed in Canada on May 16, 2017
Swear is book four in the Landry Family series but it can be read as a stand-alone… although, I don’t know who wouldn’t want to read the rest of the Landry brother’s stories! I read each book as they were released and it seemed like each new story got better and better. I don’t really want to pick one because I love them all, but if I HAD to, Ford would be my favourite Landry brother!

Ellie is a sweet, generous and kind woman. She’s also strong, independent and isn’t afraid to get her hands dirty. Ford broke her heart almost a decade ago and when she sees him again, she still feels that pull in her heart. Wanting to protect herself from future heartache, Ellie does her best to resist Ford.

Ford, what can I say about him? He is sexy, charming, protective and sweet. He made some mistakes, but he has never stopped caring about Ellie. Ford lost her once, and now that they’ve crossed paths again, he’ll do whatever it takes to win her over and gain her trust.

I love how this second chance romance unfolded, taking you on a journey of love, trust and healing. It was also great catching up with the other Landry’s as their banter always adds extra entertainment to the story! I adore this series and I cannot wait to read what’s next from Ms. Locke! If you are in the mood for a passionate, humorous second chance romance with just a bit of drama and angst, then I urge you to one-click Swear!
Read more
Helpful
Report abuse
See all reviews

This is the fourth in the Landry family series and in my opinion the best one. The series can be separately but I would recommend reading them in order.

This is a beautifully written story about 2 lost loves being reunited, although not everything goes to plan.

I would recommend the whole series, you won’t regret it
Read more
One person found this helpful
Report abuse

Kindle Customer
5.0 out of 5 stars Adriana Locke, my go to author when I'm in need of a gorgeous story!!!
Reviewed in the United Kingdom on May 21, 2017
Verified Purchase
Adriana Locke is one of my most favourite authors, she's one of a handful that I will purchase the book without reading the synopsis because I simply know its going to knock my socks off! This one didn't disappoint. Absolutely loved this story and will admit I shed a tear or two! I am so glad we get to meet Ford and Ellie, such a lovely story, well written with little snippets of those other Landry boys. Loved it and cannot wait for the next book!
Read more
Report abuse

Kindle Customer
5.0 out of 5 stars Amazing again
Reviewed in the United Kingdom on May 15, 2017
Verified Purchase
Loved ford and Ellie but I love how all the Landry family play in all the books looking forward to seeing who cams secret man is and what might happen for G and Melody 😍 this trilogy Adriana you rock
Read more
Report abuse

Mrs K Thompsett
5.0 out of 5 stars Swear by Adriana Locke
Reviewed in the United Kingdom on October 10, 2017
Verified Purchase
Loved this book. Sweet story of reunited lovers. Although nothing runs smoothly. But what a family the Landry's are. The love they have for each other is how families should be.
Read more
Report abuse

KL91
5.0 out of 5 stars Swear
Reviewed in Australia on May 14, 2017
Verified Purchase
Ford was Ellie's first love, and then he left and broke her heart. 10 years later, their lifes cross paths again. Ellie wants nothing to do with him, but Ford will do anything to have her again.

Swear is a beautifully written second chance story, that tugs on your heartstrings. Ford and Ellie are such great, strong characters, and you can feel the love between them. I really enjoyed watching their relationship grow, and overcome Ellie's fears of him leaving. Ford is so understanding, patient and sweet with Ellie, and won't give up proving his love for her.

This book is well written and easy to read. It full of romance, heartbreak and tears, and a lot of laughter.

Adriana Locke has written such a amazing series with Landrys. It has become one of my favourite. They are all such different people, with very different story's to tell, yet they are all so close and supportive of one another, and I love reading about them. I can't wait to read Camillas story.
Read more
Report abuse
See all reviews
Back to top
Get to Know Us
Make Money with Us
Amazon Payment Products
Let Us Help You
EnglishChoose a language for shopping. CanadaChoose a country/region for shopping.
© 2008-2021, Amazon.com, Inc. or its affiliates