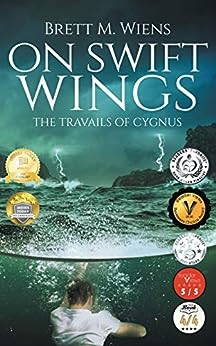 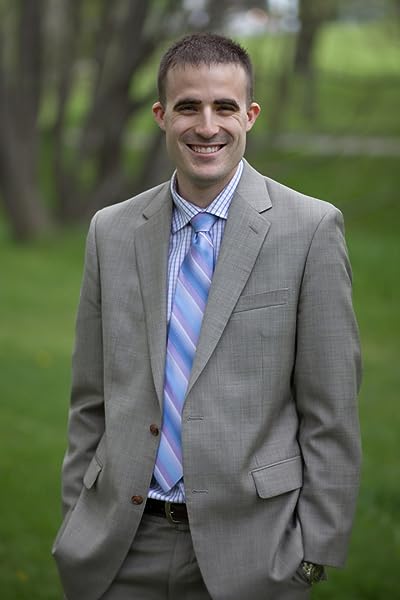 On Swift Wings: The Travails of Cygnus Kindle Edition

Brett M. Wiens was born, raised, and continues to reside in Calgary, Alberta with his wife and two children. He attended the University of Calgary where he received his bachelor's degree in Geography and a masters of Geographic Information Systems. He has traveled to four continents and is constantly learning new languages from French to Spanish, Latin, Italian, and a little American Sign Language. --This text refers to an alternate kindle_edition edition.

4.6 out of 5 stars
4.6 out of 5
12 global ratings
How are ratings calculated?
To calculate the overall star rating and percentage breakdown by star, we don’t use a simple average. Instead, our system considers things like how recent a review is and if the reviewer bought the item on Amazon. It also analyzes reviews to verify trustworthiness.
Top reviews

Taylor Berezowski
5.0 out of 5 stars Great read!
Reviewed in Canada on June 10, 2020
Verified Purchase
A really clever and thought-provoking novel that mixes a dry satirical humour with fantasy.
Beautifully painted scenes and locales that really stick with you.
Some parts of the story had me in tears, others gave me goosebumps. The island of the Loogenage was a wonderful short-story adventure in itself.
Read more
One person found this helpful
Helpful
Report abuse

Michael
5.0 out of 5 stars Made me appreciate the original from this homage
Reviewed in Canada on April 29, 2020
I made a point of rereading the original Gulliver's Travels before reading Swift Wing and the author's loving tribute and modern tweaks shone through. You can definitely enjoy "On Swift Wings" without the need to visit the original, but I found the experience much richer for my effort as I could more easily recognize the efforts that Wiens made in crafting this novel.
I very much enjoyed the journey and worlds of the protagonist Cygnus and the evolution that Wiens gave to Swift's original Travels. Bon Voyage as you take your own journey into these fantastic and treacherous allegorical hidden countries.
Read more
One person found this helpful
Helpful
Report abuse

I will admit that while this isn’t usually what I go for in books, I thoroughly enjoyed it. My favourite part of any novel is being able to bring the story to life in my head and Wiens makes it so easy to do so with his use of such descriptive and vivid language. He writes in such a fantastical and engaging way. This book is the definition of being a kid again.

I enjoyed the lightheartedness of the story, a young man who encounters such magical and mystical lands, but within his discoveries of each island, there is so much more to be reflected on (if you so choose to) as it relates to the history of the human race.

My favourite part would have to be part 3, the main character goes through so many misinterpreted historical events and how history is really just one big game of telephone!

The only reason why it doesn’t get 5 stars is because I think the main character’s story gets lost after the introduction. I love being able to relate to the main character and live vicariously through them while reading. I wish we got to know more about his head space and his motivations throughout his journeys. Was there an overarching personal conflict that he was going through? What did he discover internally/emotionally in all the islands he visited?
Read more
One person found this helpful
Helpful
Report abuse

Snowflake
5.0 out of 5 stars Wonderful Fantasy/Social Commentary Novel!
Reviewed in Canada on April 23, 2020
This is a fantastic modern version of Gulliver's Travels! The update was very well done. It wasn't just the same story set in current times; it was a similar story that reflects it's origins, and also how the world has changed to become where it is today. The story is told with humour and intelligence - a truly enjoyable read!
Read more
One person found this helpful
Helpful
Report abuse

Vitali
5.0 out of 5 stars Excellent.
Reviewed in Canada on April 13, 2020
I purchased the book directly from the author. I'm still reading it, but so far I find it well written and entertaining.
Read more
One person found this helpful
Helpful
Report abuse

Stewart Adams
4.0 out of 5 stars Worth your time.
Reviewed in Canada on September 25, 2019
An interesting modernization of Gulliver's Travels. There are some great concepts in the book including "perfect" societies and how one person can make a difference.
It is not an easy read due to the meaty sentences, but I am glad I read it.
Read more
One person found this helpful
Helpful
Report abuse
See all reviews

Jessica
4.0 out of 5 stars An enjoyable read.
Reviewed in the United States on January 19, 2020
Verified Purchase
To be completely honest, I did not read through the entire blurb before purchasing this book. I downloaded it to my Kindle, and upon opening it, my little reading machine automatically forwarded me to the preface. So I was actually a few chapters into part one before I realized that this was a retelling of 'Gulliver's Travels'. (It was kind of amusing, really.)
I feel that retellings have to be done well in order to merit the act of telling a story over again. Particularly classics; if there isn't anything new to add why bother, and at the same time readers and fans of the originals want enough of the core story to be present and characters to be at least somewhat recognizable.
I think that this adaptation was done well.
My favorite bit was Part 3 into Part 4, with the introduction of sorcerers and teleportation through the fabric of time. Science fiction elements being introduced into what is a classic satire/fantasy story is an interesting twist. This too is something that has been done before, but takes a certain amount of cleverness to pull off. I think that in this case it was successfully handled.
Read more
One person found this helpful
Report abuse

RinnyC
4.0 out of 5 stars If you love satire, you'll love this book
Reviewed in the United States on January 14, 2020
Verified Purchase
What a fun read. It's been a while since I read satire, but this book made me remember why I love it so much. Written like a futuristic Gulliver's Travels, this book takes a satirical look at our evolutionary-stagnant political system. The book reads like an adventure story as well, so it could be entirely possible to ignore the satire or even miss it if that's more your cup of tea. The scenes and characters are descriptively written, and there are enough meat and potatoes in the book to get swept up in the story, however, i found the subtle satirical comments and observations incredibly smartly written. Overall a really satisfying read.
Read more
One person found this helpful
Report abuse

Nicole P
4.0 out of 5 stars Unusual book!
Reviewed in the United States on February 3, 2020
Verified Purchase
This was an unusual story! Cygnus, our narrator, survives a plane crash and lands in a remote, unknown island filled with unusual creatures. It's satire, apparently, but I actually didn't get the satire part (this could be because I have never read Gulliver's Travels). This felt like an adventure tale to me with a narrator filled with some dry wit. I thought this was adventurous, fun, and extremely unusual. I also loved the brief summary of what the chapter would include at the beginning. I definitely recommend this unusual book!
Read more
One person found this helpful
Report abuse
See all reviews
Back to top
Get to Know Us
Make Money with Us
Amazon Payment Products
Let Us Help You
EnglishChoose a language for shopping. CanadaChoose a country/region for shopping.
© 2008-2021, Amazon.com, Inc. or its affiliates