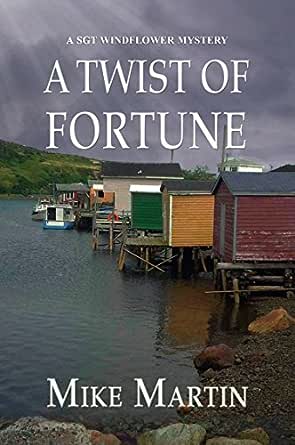 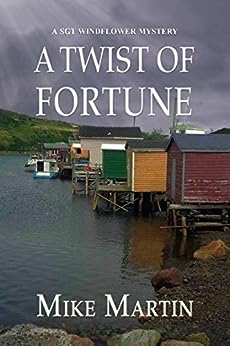 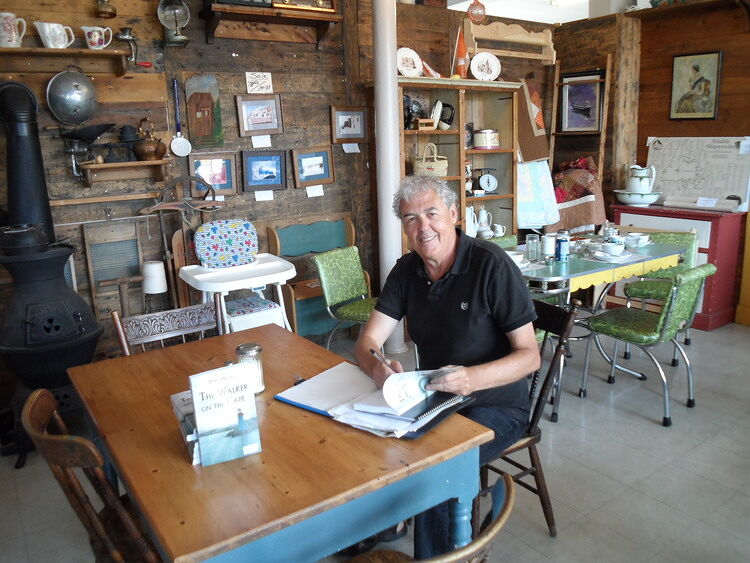 A Twist of Fortune Kindle Edition

4.3 out of 5 stars
4.3 out of 5
23 global ratings
How are ratings calculated?
To calculate the overall star rating and percentage breakdown by star, we don’t use a simple average. Instead, our system considers things like how recent a review is and if the reviewer bought the item on Amazon. It also analyzes reviews to verify trustworthiness.
Top reviews

Kellie Camilla
5.0 out of 5 stars Being there
Reviewed in Canada on February 23, 2016
Verified Purchase
I find these books in a Nfld setting both interesting and historic....most of the anecdotes and places are real, and it's like being in the story
Read more
Helpful
Report abuse

Cecile Sune
4.0 out of 5 stars Good mystery with descriptions of small town living in Newfoundland
Reviewed in Canada on November 27, 2015
At the beginning of A Twist of Fortune, Sergeant Winston Windflower watches in dismay as his girlfriend, Sheila, gets arrested during an illegal protest at the local fish plant. Then a snowstorm hits Grand Bank, Newfoundland, and a pharmacist dies in a car accident on the highway. What seems to be a straightforward investigation turns out to be a lot more when a body is discovered in the trunk of the car.

A Twist of Fortune is the fourth book in the Sgt. Windflower series. The story is interesting and fun to read. Its main character is a likable mountie who doesn’t shy away from his duties and is honest and fair. His girlfriend, Sheila, has a bigger role in this book which is great as she was a little too in the background in the previous novels. Mike Martin’s love of Newfoundland is evident when he writes about its history, its weather, and its fishing industry. The author also gives a glimpse into the aboriginal culture, as Windflower has a Cree heritage. For example, the main character performs smudge rituals in the mornings and is attentive to the significance of dreams. Short chapters give the story a certain rhythm, but I must say that I found it slow going at times. In addition, in the previous installment of the Sgt. Windflower series, Sheila was supposed to go back to school to study nursing, but there’s no mention of this in the new book.

On the whole though, I enjoyed A Twist of Fortune and found that the author had made a lot of progress in his writing since Beneath the Surface. Readers who like a good mystery and descriptions of small town living will certainly appreciate this book.

A Twist of Fortune was sent to me for free in exchange for an honest review.

Please go to my blog, Cecile Sune - Bookobsessed, if you would like to read more reviews or discover fun facts about books and authors.

Barry Finlay, Author of The Marcie Kane Thriller Collection
5.0 out of 5 stars A Nice 5-Star Mystery
Reviewed in Canada on June 25, 2015
This is the first book I've read in the Sgt Windflower series. Usually, jumping into a series without reading the previous three books is not recommended, but no problem here. The book stands solidly on its own. A Twist of Fortune is a crime novel that is full of unexpected twists and turns. The characters are well developed and the storyline is believable. I could relate to the characters as there are many similarities between the small town in Newfoundland where Sgt Windflower resides and the small town on the prairies where I grew up. But anyone will enjoy the charm of a small town and the interactions among the residents, which are captured perfectly by the author. Add in an ever deepening mystery, the challenges of a relationship at a crossroads and the difficulties faced by the residents as the snow piles up and you have an enjoyable read. No bullets flying... just a nice 5-star mystery.
Read more
Helpful
Report abuse

Part police procedural, part daily problems in law enforcement, part small town life, and more. The accident victim turned out to be a local pharmacist addicted to prescription drugs, but cause of death was poison. And then there was the murdered drug dealer in the trunk. Add in winter weather problems, a respected superior falling off the wagon, the local mayor dying of a coronary and leaving a real void in the community, and protesters at the closed fish plant. Then there are Windflower's own concerns about beloved relatives on the other side of the country, acquiring the original victim's dog, and decisions being made by his longtime girlfriend. The best part of the stories is the feeling of finding new friends in the characters.
Read more
Report abuse

D. Zendel
5.0 out of 5 stars A treat to read
Reviewed in the United States on June 3, 2015
Verified Purchase
Sgt. Winston Windflower is facing crises, both personal and professional. His beloved patch, Grand Bank, Newfoundland, is threatened by the closing of the town’s largest employer, and his longtime girlfriend, Sheila, is leading the charge to try and stop the closure. Her stance makes things awkward for Windflower – he wants to be supportive, but his boss expects him to bring Sheila to heel. Sheila has a strong affinity for her hometown, but it’s also Windflower’s place of business, and their relationship is big news. Windflower must also deal with a massive snowstorm that leaves the town temporarily without power, and a growing prescription drug problem.

I love how the author describes Grand Bank, and Windflower’s fondness for the areas’ cuisine. I feel like I’m right there, sharing a piece of peanut butter cheesecake with Winston, or having a spaghetti dinner at Sheila’s house. My favorite supporting characters - Dr. Sanjay, the coroner; Eddie Tizzard, Windflower’s second; Windflower’s ne’er-do-well uncle, who keeps him in touch with his native roots; and Sheila, of course - are back in this fourth installment in the series. Add in a rescued collie named “Lady,” and Winston has his hands full.

These books are always a quiet read for me, but I mean that in a good way. They are character driven, rather than having lots of big explosions or complicated shenanigans. Don’t get me wrong, there were some surprises in this book – no spoilers, but the people who get touched by the long arm of the law in this particular story ... wow, just wow. Not what I expected. The ending was very satisfying as well. I hope Sgt. Windflower is around for a long time.

I was privileged to be a beta reader for Mike Martin on this book. If you like traditional cozies with a great sense of place and multi-dimensional characters, this is the series for you.
Read more
One person found this helpful
Report abuse

Love2read
3.0 out of 5 stars There is no real mystery, but I love the characters and setting.
Reviewed in the United States on September 15, 2018
Verified Purchase
This is the second book I have read in the series. Nothing really happens. The Mounty hero has a girlfriend, he cooks and eats food, he walks his dog, deals with police procedures, paperwork, there is trouble in the area with bad weather, closed roads, drug dealers, there are some murders that are solved without mystery. But if you read this series, you love the setting and characters. Good books to read if you want to learn about Newfoundland and Nova Scotia. I love learning about Canada. Easy read when you do not want to think much. Sort of like slow moving Hillerman books except in those you may have more of a mystery.
Read more
Report abuse

Stacie Theis
5.0 out of 5 stars A Twist of Fortune
Reviewed in the United States on June 1, 2015
Verified Purchase
A Twist of Fortune is a worthwhile read that details the life and work of Sargent Winston Windflower as he tries to unravel the mysterious deaths of two men, combat the ruthless Newfoundland winter, and keep the heart of the woman he loves.

Sgt. Windflower is preparing for a miserable winter storm that threatens his community. While his troopers are closing the highway to keep travelers safe, they discovery of a vehicle accident. The deceased driver, a local pharmacist, appears to be the only fatality until they open the trunk. Now, it's looking a lot less like an accident and a lot more like a homicide, but every lead Sgt. Windflower and his troopers follow only leaves them with more questions.

Meanwhile, Sgt. Windflower has been having odd dreams that he can't quite decipher, his eccentric uncle ends up on his doorstep again, and his relationship with Sheila is strained.

Can Sgt. Windflower get his personal life in order and survive the brutal Newfoundland winter all while managing to solve a crime that is turning out to be bigger than he ever imagined?

Like the other books in the series, A Twist of Fortune's steady pace makes it easy to become lost in the story. I found the book to be intriguing and well-written. Sgt. Windflower is an easily likable character who has exceptional values and expects nothing less from those in his life. A Twist of Fortune is more than a mystery. It's a story of building quality relationships, living with principles, and striving to achieve good. The author intertwines his knowledge of Newfoundland throughout the book giving insight and adding believability. The story flows easily and the author's attention to detail makes A Twist a Fortune an excellent read.

I highly recommend picking up a copy.
Read more
One person found this helpful
Report abuse

Prairie House
5.0 out of 5 stars A Favorite
Reviewed in the United States on May 7, 2015
Verified Purchase
Sgt. Winston Windflower becomes more interesting with each book. He is not the typical renegade or fast action cop; he does his job, follows the rules whenever possible, and keeps his balance with his beliefs and personal relationships. He has high expectations of the people he supervises and doesn't let problems slide and yet has great empathy. The other characters hold their own too, especially Tizzard, Sheila, Herb and the coroner.

The plot is well done; the Mounties must work together to track the complicated drug network. I especially love the setting. In this book the Newfoundland winter is a major factor. Some might think the snowstorms are overdone but those of us in the northern climes are well aware that once one of these systems starts pounding an area, it can be relentless. Well done!
Read more
Report abuse
See all reviews
Fast, FREE delivery, video streaming, music, and much more
Prime members enjoy Free Two-Day Shipping, Free Same-Day or One-Day Delivery to select areas, Prime Video, Prime Music, Prime Reading, and more.
> Get started
Back to top
Get to Know Us
Make Money with Us
Amazon Payment Products
Let Us Help You
EnglishChoose a language for shopping. CanadaChoose a country/region for shopping.
© 2008-2020, Amazon.com, Inc. or its affiliates