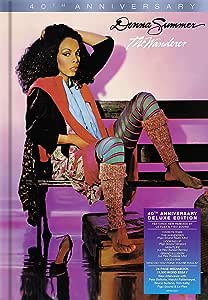 Mediabook packaging. For this 40th Anniversary edition, The Wanderer has been re-evaluated and now fuses-together 1980 with 2020, showcasing the strength of the album's songs, with brand new remixes by the Italian production team behind Change and Artist/Producer/Remixer Le Flex. After years of silence, in 2018 Mauro Malavasi and Davide Romani resurrected Change with an album that retained their classic sound but with a contemporary twist, produced and mixed with the inhouse production team, Figo Sound, who were invited to remix two of Donna's tracks. Figo Sound has created two contemporary radio-friendly tracks, with 'The Wanderer', retaining it's shuffling beat and 'Looking Up', which firmly plants Donna Summer back on the Dancefloor!

5.0 out of 5 stars
5 out of 5
6 global ratings
How are ratings calculated?
To calculate the overall star rating and percentage breakdown by star, we don’t use a simple average. Instead, our system considers things like how recent a review is and if the reviewer bought the item on Amazon. It also analyzes reviews to verify trustworthiness.
Top reviews

JF Rodriguez
5.0 out of 5 stars Great Reissue
Reviewed in the United Kingdom on October 20, 2020
Verified Purchase
Great to see this underrated album being given the deluxe treatment. Although 'The Wanderer' was the lead single, 'Looking up', 'Grand Illusion', 'Breakdown' and 'Night Life' are far superior tracks in my opinion which are given here (except 'Breakdown') the extended/remix treatment. 'The wanderer' is also presented with two different remixes. I am not very keen on the album is presented here on a single CD with re-sequenced tracks: 3 remixes followed by the album concluding with another 4 remixes. Small hitch for a purist like me but the remixes should have been on separate disc in my opinion. Both the outer and inner packaging are nice and the set also features an extensive liner note essay with plenty quotes from some of Donna's collaborators.
Read more
Report abuse

C. Harrison
5.0 out of 5 stars The wanderer returns!
Reviewed in the United Kingdom on October 18, 2020
Verified Purchase
I bought this album on the day of release 40 years ago, I never understood why it didn't reach the heights of her previous albums as in my opinion it's one of her most innovative albums. This version adds the remixes which do give it a contemporary twist, hopefully it will reintroduce the album to a new generation and give it the recognition it so deserves.
Read more
Report abuse

Luckys
5.0 out of 5 stars Superb
Reviewed in the United Kingdom on October 19, 2020
Verified Purchase
An incredible reissue. Beautifully put together, and I love the new Remixes, a great as album.
Read more
Report abuse

Rico Alcantara
5.0 out of 5 stars Great album!
Reviewed in the United Kingdom on October 17, 2020
Verified Purchase
Great album, underrated! The remastering is very good! And the new mixes good as well.
Read more
Report abuse
See all reviews
Fast, FREE delivery, video streaming, music, and much more
Prime members enjoy Free Two-Day Shipping, Free Same-Day or One-Day Delivery to select areas, Prime Video, Prime Music, Prime Reading, and more.
> Get started
Back to top
Get to Know Us
Make Money with Us
Amazon Payment Products
Let Us Help You
EnglishChoose a language for shopping. CanadaChoose a country/region for shopping.
© 2008-2020, Amazon.com, Inc. or its affiliates