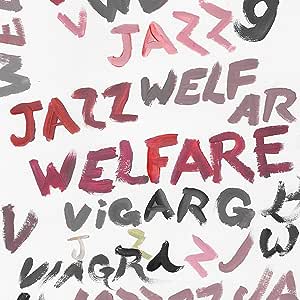 Vinyl LP pressing. 2021 release. Since their founding in 2015, Swedish post-punk band Viagra Boys have made a name for themselves burning up stages around the world. There's a little Iggy Pop spit and seethe, a David Yow drunken stumble, and a bite of Nick Cave's haunted bark. Add a dash of motorik groove, a pinch of post-punk grime, and a dose of no wave howl. Welfare Jazz doesn't bargain with the anxiety in that defeated feeling, but rather a boiling certainty that nothing and no one is absolute. There's plenty of blame to go around, and things are just a lot more interesting when you admit that you're not always going to be nice, you're not always going to pick the right words in a fist-fight. So why not keep moving forward, swaying and strutting into the night.

4.3 out of 5 stars
4.3 out of 5
6 global ratings
How are ratings calculated?
To calculate the overall star rating and percentage breakdown by star, we don’t use a simple average. Instead, our system considers things like how recent a review is and if the reviewer bought the item on Amazon. It also analyzes reviews to verify trustworthiness.
Top reviews

deborah
5.0 out of 5 stars Great album
Reviewed in the United Kingdom on January 13, 2021
Verified Purchase
Great album
Read more
Report abuse
See all reviews
Fast, FREE delivery, video streaming, music, and much more
Prime members enjoy Free Two-Day Shipping, Free Same-Day or One-Day Delivery to select areas, Prime Video, Prime Music, Prime Reading, and more.
> Get started
Back to top
Get to Know Us
Make Money with Us
Amazon Payment Products
Let Us Help You
EnglishChoose a language for shopping. CanadaChoose a country/region for shopping.
© 2008-2020, Amazon.com, Inc. or its affiliates