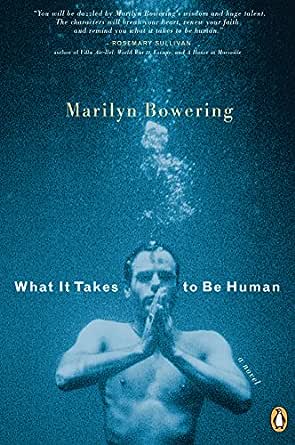 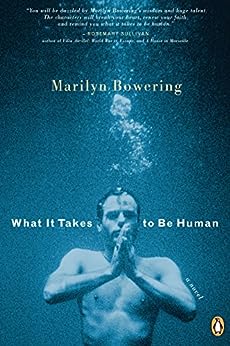 What It Takes to Be Human Kindle Edition

Marilyn Bowering is an award-winning novelist, poet and playwright whose first novel, To All Appearances a Lady, was a New York Times Notable Book. Her second novel, Visible Worlds, was shortlisted for the prestigious Orange Prize, nominated for the Dublin IMPAC Prize and awarded the Ethel Wilson Fiction Prize.

Bowering was born in Winnipeg and grew up in Victoria, B.C. She has lived in the United States, Greece, Scotland, Spain and Canada, and now makes her home in Sooke, British Columbia.

--This text refers to the paperback edition.
click to open popover

5.0 out of 5 stars
5 out of 5
1 customer rating
How does Amazon calculate star ratings?
Amazon calculates a product’s star ratings using a machine learned model instead of a raw data average. The machine learned model takes into account factors including: the age of a review, helpfulness votes by customers and whether the reviews are from verified purchases.
Top reviews

Stephen A. Haines
HALL OF FAME
5.0 out of 5 stars Renovation or reconstruction?
Reviewed in Canada on January 23, 2007
Within a week of Canada's joining the rest of the British Empire in resisting Nazi expansion, Alexander - "Sandy" - Grey clouts his father with a tire iron. Wishing to become a pilot, but denied permission by his fundamentalist preacher parent, the encounter results in Sandy being dispatched to an institution for the criminally insane. This is far more serious than a criminal trial and penitentiary - an institution has no fixed term and the inmate few, if any forms of legal recourse. The director of such an institution has powers no judge dreams of possessing. Sandy, desperate at what he considers a grave injustice, leaps from a ferry taking him away. Struggling in the strait's chilly waters, he's saved by Georgina, who will come to play a major role in Sandy's life.

The asylum has undergone many identities of its own. Run by "Dr Frank" at the time of Sandy's arrival, it had once been a jail. In that interim, Scot immigrant Alan Macauley had been hanged for the murder of an Irishman while working in the bush. While Dr Frank is dealing with Sandy's past, trying to reconstruct it to understand what led to the attack on his father, Sandy himself engages in an attempt to rehabilitate Alan's name. Injustice derived from circumstances haunts them both.

The asylum is home to a variety of men. There's Winchell, a communist from Bowering's home town of Winnipeg. He was a participant in Winnipeg's Great Strike of 1919. Later, he was a Loyalist soldier in the Spanish Civil War. "Did you kill anyone in Spain?", Sandy asks him. "What kind of soldier would I be if I didn't?" Yet, the other occupant of the room, Karl, is in the asylum for a different reason - the day war was declared, this German emigre released all the caged birds in Stanley Park in protest. He's a dedicated pacifist. Sandy, still a young man, must learn to cope with this diversity of outlooks and use them to rebuild his own life. One track he refuses to take is reconciliation with his family - "they're not my real parents". It is this issue on which the story pivots - Dr Frank wants to know why Sandy makes this declaration.

Although Sandy had been dispatched to a religious seminary by his father, he escapes to enter a college. He learns about poetry and philosophy there, finding opportunity to apply the lessons while in the asylum. Pete Cooper, one of the "Attendants", is the "bad cop" of the story, while Ron Signet is the more lenient one. Between the Attendants and Dr Frank, Sandy must cope with shifting levels of trust. His survival depends upon it. Dr Frank's restorative technique, using sodium pentathol - "truth serum" - to prompt Sandy into revealing "the truth" about his past life becomes both a battle of wills and an exercise in self-revelation. Is Sandy learning about himself or restoring himself? His aim, never lost sight of, is to be free.

As Bowering parades her characters across the page, she's careful not to obtrude on the story. We know little of Dr Frank's "outside" life. Even Pete Cooper's personal situation is explained late, and doesn't underpin the foundation of the personality he displays at the asylum. It doesn't need to - Cooper, Frank and the rest are but instruments in Bowering's hands. Sandy struggles to deal with people on his own terms, and those outside conditions are of little concern. What happens in the asylum is but part of Sandy's existence as Dr Frank delves into the past. Bowering's skills as a poet emerge in Sandy's declarations during the "interviews" with pentathol coursing through the young man's veins. Her real talent comes with Sandy's surreal experiences - a brush with a mystical sea monster and visitations by Alan Macauley. Macauley's personality is on a par with Sandy's - it's easy to consider Alan as an alternate ego of Bowering's protagonist. To Sandy, rehabilitating Alan is clearly related to his own desire for vindication and release.

This is a powerful story told with Bowering's usual finesse. She imparts Sandy's reflections lucidly - even without knowing the truth of the attack, the reader is drawn to Sandy's side. He's convinced he's the victim of an injustice as Alan Macauley was, and you have no doubt of his truthfulness in his relating of his life. His sole buttress, Georgina, is a weak reed, Sandy provides support as much as he receives it. With an ailing father and venomous sister, Georgina spends much time with the bottle. Yet, it is Sandy's relationship with her that brings all the threads of Sandy's life into a finished garment. "What it takes to be human" is to experience love. [stephen a. haines - Ottawa, Canada]