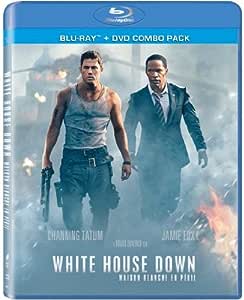 Capitol Policeman John Cale (Channing Tatum) has just been denied his dream job with the Secret Service of protecting President James Sawyer (Jamie Foxx). Not wanting to let down his little girl with the news, he takes her on a tour of the White House, during which the complex is overtaken by a heavily armed paramilitary group. Now, with the nation's government falling into chaos and time running out, it's up to Cale to save the president, his daughter, and the country. Co-starring Maggie Gyllenhaal, Jason Clarke, Richard Jenkins and James Woods.

4.6 out of 5 stars
4.6 out of 5
2,814 global ratings
How are ratings calculated?
To calculate the overall star rating and percentage breakdown by star, we don’t use a simple average. Instead, our system considers things like how recent a review is and if the reviewer bought the item on Amazon. It also analyzes reviews to verify trustworthiness.

CareBear❤️
3.0 out of 5 stars Plesently surprised
Reviewed in Canada on April 16, 2015
Verified Purchase
This movie came out around the same time as Olympus has fallen and I thought it would be the same thing so I decided to not watch it because Olympus was such an amazing movie
Boy was I wrong this movie is amazing and funny and is totally not like Olympus the plots are completely different so if you were thinking the same that I did u should definitely give this movie a chance you won't be disappointed
Read more
3 people found this helpful
Helpful
Comment Report abuse

Trek Fan..
1.0 out of 5 stars THE KID WAS BETTER, THAN ALL..
Reviewed in Canada on October 16, 2014
Verified Purchase
“Well now, “White House Down” American directors can’t seem to stop trying to blow up the Whit House, 24 did it,
with Jack Bauer at the helm, who else let see, oh my good-lord, I can’t believe it, lots more you say,
I don’t know what kind of Bullets the bad guys use but It seems to have a tracking device, you know,
we don’t want to hit the stars of the movie, we really don’t want that, even if it looks stupid in the process of
what we see, I don’t think I've ever seen a movie out of Hollywood with a real gunfight, that looks real,
not someone jumping over a desk with two hundred rounds of ammunition flying over their head, just to call it a day,
what a story this was, I'm not even going to use names, bad guy mad at President because someone was killed,
in his family, I think, can’t remember, my eyes was rolling to the ceiling, and What an ending, oh boy, now I can rant,
I wish though, that it was in Chinese with no English, that way I can just watch the Action, stupid dialogue, and story,
best part of this movie, the kid was better than all of them,
THE KID WAS BETTER, THAN ALL..
Read more
Helpful
Comment Report abuse

Kikki
4.0 out of 5 stars Good movie
Reviewed in Canada on June 21, 2019
Verified Purchase
Full of action and adventure, this was an entertaining movie to watch
Read more
One person found this helpful
Helpful
Comment Report abuse

ken gourlie
5.0 out of 5 stars explosive
Reviewed in Canada on October 27, 2020
Verified Purchase
high action from start to finish. an awesome movie if you like watching the White House get destroyed.
Read more
Helpful
Comment Report abuse

Paul_ABZ
4.0 out of 5 stars Cheesy 80s/90s big-budget one-man-army style film.
Reviewed in the United Kingdom on December 17, 2015
Verified Purchase
It’s easy to confuse this with Olympus has Fallen, but in a duel for the oval office this one wins hands-down, mostly due to the entertainment-factor; it’s the true embodiment of the term ‘action romp’. Everything that can do so, explodes during big set pieces that punctuate the movie, and is generously littered with laughs too – by the end I was even guilty of a few fist-pumps.

I’d go as far as saying that it’s the kind of movie that – at least on paper – we should all hate: big, loud, dumb, derivative, but the director seems to know this, and fully embraces it – cheesing everything up to 11. The only real downside is that it’s a tad on the long side (for the kind of film it is). If you want a cheesy 80s/90s big-budget one-man-army taking on waves of despicable henchmen, look no further.

rbmusicman/and/movie-fan'
4.0 out of 5 stars 'SEEM'S A TOUGH WAY TO GET A JOB-OFFER'
Reviewed in the United Kingdom on January 20, 2014
Verified Purchase
Not for the first time, two film studios made Movies with a similar
theme.
Personally I quite enjoyed 'Olympus has Fallen' with 'Gerard Butler'
This film is brought to us by the director 'Roland Emmerick' who
brought us the visually spectacular movies such as...'INDEPENDENCE
DAY'....'THE DAY AFTER TOMORROW'....and...'2012'
'John Cale' goes to the 'White House' for an interview to join the
security staff there, he takes his young daughter 'Emily' along to
enjoy the experience of the surroundings.
He's turned down, he and his daughter join a White House tour that
is just about to start, before the tour is completed a 'paramilitary'
group posing as workmen have smuggled in an explosive device along
with an array of weaponry, things soon kick off.
'Cale's' first instinct is keep his daughter safe, but events move
fast he soon becomes a key player in trying to ensure 'President
James Sawyer's' safety.
Retiring Chief of Security 'Walker' is running the show....he has
a purpose in mind....if things don't go the way he intends and the
authorities don't follow instructions....the sixty one hostages die,
along with the President (if they can find him that is)
Explosive action throughout as all-hell breaks loose in and around
the White House'
As one would expect there is an impressive array of special-effects
to cherish.
Great picture and sound quality throughout.
(can honestly say, I enjoyed both this and the 'Gerard Butler' movie)
5/5 for entertainment value.
Special features:-
*A dynamite duo' - 'Tatum Channing' and 'Jamie Foxx'
*Man of action -'Stunt training'
*Meet the Insiders - 'Supporting cast'
*Roland Emmerick' - 'Upping the ante'
Plus : exclusive to Blu-Ray extras including:
*The ever popular - 'Gag Reel'
* The inside story - From script to screen'
* The Beast - 'Inside the president's limo'
* The full arsenal - 'Guns, Grenades, Tanks, and Choppers'
* Presidential treatment - 'A mission production'
* Crushing the oval office - 'Special effects breakdown'
* Drowning the Beast'
* Recreating the White House.
* VFX - 'Boundaries Down'
* Lights, camera, heart-pounding-action.
Read more
One person found this helpful
Report abuse

Miss Maisie J
5.0 out of 5 stars I loved this movie
Reviewed in the United Kingdom on July 30, 2014
Verified Purchase
I loved this movie, as a huge DVD buff I tend to go by what I think and feel, you'll never please everyone no matter what you do. I bought this with no hesitation and I enjoyed it from the start to the finish, no only is there lots of action (obviously) but there are some very good comedy moments that make it well worth watching. Put it on and settle down for a movie to take your mind off of everything else, That's what I like about this film, I've watched it several times and it just helps you have that time watching but not worrying or thinking on everything else you have to do, you get caught up in the stories entwined within. So sit back and enjoy the show.
Read more
2 people found this helpful
Report abuse

Robyn B. Mcgorm
5.0 out of 5 stars What a movie
Reviewed in the United Kingdom on March 21, 2014
Verified Purchase
Now this could and should have been better as I was very disappointed with it, Channing should not have taken the role of the girls father as this seem to kill it, maybe as a security guard right from the beginning would seem to be better. Maybe as the president would have suited him even better. Magic Mike was a fabulous movie and he suited that far better. Olympus has fallen had more action and intake that left this one for dead. Channing is a good actor and did play his part well as the other cast but the story was great and there was something lacking right from the start please no offense as it's only my opinion. I still recommend this to others who have there own views, Washington falls to the bad guys by men that are suppose to be good security guards. Most of the president's staff are killed and it looks as if the bad guys are winning for a change. There's always someone to botch up the job isn't there. I rated this an A grade, worth looking into for a night in with feet up relaxing with your popcorn for something different. Enjoy!
Read more
Report abuse

Mr. R. W. Graham
4.0 out of 5 stars Typical. You wait ages for a terrorrist to attack the White House film then 2 come along at once!
Reviewed in the United Kingdom on February 3, 2014
Verified Purchase
Policeman John Cale is at the White House for a job interview as secret service agent which he doesn't get. Later he takes his daughter on a tour of the White House when it is attacked by terrorrists lead by a traitor in the White House and Cale must get the President to safety. A daft but very entertaining action film with a good cast. Channing Tatum and Jamie Foxx make an unlikely buddy buddy act as Cale and the President and the rest of the cast Maggie Gyllenhaal, James Woods, Jason Clarke and Richard Jenkins are all good. Say what you like about director Roland Emmerrich's films but he always knows how to put a good cast together and this is no exception. Very silly complete nonsense but a lot of fun with good action scenes and performances and simmilar to Olympus Has Fallen.
Read more
Report abuse
See all reviews
Fast, FREE delivery, video streaming, music, and much more
Prime members enjoy Free Two-Day Shipping, Free Same-Day or One-Day Delivery to select areas, Prime Video, Prime Music, Prime Reading, and more.
> Get started
Back to top
Get to Know Us
Make Money with Us
Amazon Payment Products
Let Us Help You
EnglishChoose a language for shopping. CanadaChoose a country/region for shopping.
© 2008-2020, Amazon.com, Inc. or its affiliates