Share
Have one to sell?
Sell on Amazon
Got a mobile device?
You’ve got a Kindle.

Flip to back Flip to front
Listen Playing... Paused   You're listening to a sample of the Audible audio edition.
Learn more 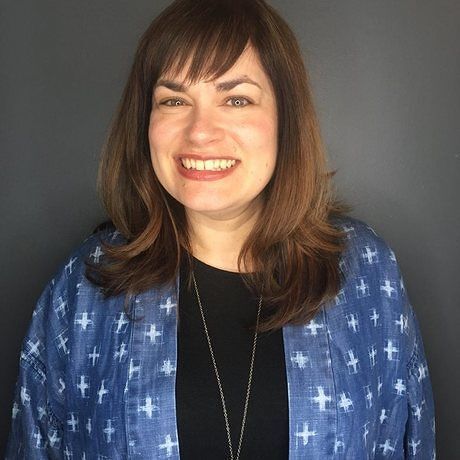 by Leanne Prain (Author)
4.4 out of 5 stars 45 ratings
See all formats and editions
Sorry, there was a problem loading this page. Try again.

Contemporary knit culture embraces dichotomy – blending tradition with subversion, feminism with domesticity, art with craft – so knitters might see no contradiction in a how-to guide for knit graffiti. In Yarn Bombing, authors Mandy Moore and Leanne Prain outline the knit/crochet graffiti phenomenon and provide readers with tools to get involved. To “yarn bomb” is to commit knit/crochet graffiti. “Tags” include car antenna cozies, doorknob covers, and tree sweaters. Employing interviews with international bombers and chapter headings like “Why Yarn Graffiti Is the Bomb” and “How to Build Your Arsenal,” Moore and Prain present the trend as a way to “take back the knit,” rendering the domestic craft as public art. The book has knit cred – Moore is technical editor of the website knitty.com, and Debbie Stoller (author of the seminal guide Stitch ’n Bitch) offers a blurb. Yarn Bombing extends Stitch ’n Bitch’s approach to knitting, appealing to hipster knitters with attractive photography and irreverent patterns, reclaiming knitting as an act that is both feminist and anarchic. Yarn Bombing succeeds with unorthodox patterns, including a knitted mushroom and tulip, knit shoes slung over telephone lines, and poster frames. The book’s infectious spirit culminates in the final chapter, which details imaginative projects such as a crocheted army tank cozy meant as an anti-war protest and the world’s longest scarf. But the yarn bombing trend seems too emergent to necessitate an entire book. Yarn Bombing’s history of graffiti is more rudimentary than informative (“Painted graffiti appeared on railroad boxcars in North America in the 1920s. During World War II, American troops left graffiti throughout Europe…”), and very basic introductions to knitting and crochet aren’t very useful. A section devoted to gauge (the relative weight of textiles) is out of place in a guide bent on anarchy, and proffering resources such as Flickr or Facebook is redundant. In general, however, the book’s spirit manages to inspire. While not an essential addition to any crafting library, Yarn Bombing stands out as a fun one.

The book is beautifully put together and offers a history of yarn graffiti, as well as how to start your own projects, and patterns. I didn't realise how much of a movement was going on with yarn bombing. I've been thinking about trying it for a long time and this book may have just given me that extra inspiration (along with great tutorials).
-OffTheHooks (craftyash.blogspot.com) ― OffTheHooks

With a part-instructional new Canadian book released in September and winter on the way, guerrilla knitting seems likely to spread. (After all, poles need sweaters, too.) In Yarn Bombing: The Art of Crochet and Knit Graffiti, Vancouver authors Leanne Prain and Mandy Moore trace the whimsical movement back to an Austin, Texas, crew called Knitta Please, who tagged a doorknob in Houston in 2005 and spurred a "knit-graffiti revolution" that spread across the blogosphere and around the world.
-Toronto Star ― Toronto Star

In Yarn Bombing, beautiful full-page photos illustrate the unique visual balance of street art and traditional stitching.... After reading it you may well be inspired to pick up your needles or obtain your first crochet hook: Novices are welcome, and full chapters are devoted to tutorials.
-Bitch ― Bitch

Yarn Bombing is not just a history of the movement, but a how-to guide for aspiring yarn bombers themselves.... [It's] a good reminder that craft, yarn-based or otherwise, is as legitimate a form of expression as any other medium.
-Maisonneuve ― Maisonneuve

Moore and Prain provide an introduction and history of this creative phenomenon as well as simple projects and suggestions for would-be "taggers." Don't be surprised if this book inspires your library's patrons to knit or crochet cozies for the trees on your library's property.
-Library Journal ― Library Journal

[Yarn Bombing] has the perfect mix of technical proficiency, humour, and dedicated artistry that makes knitting communities so popular.... There's something here for everyone.
-subTerrain ― subTerrain

These guerrilla knitters take to the streets and leave knitted "tags" in their hometown, much like Banksy would if he had a pair of knitting needs. With interviews and tips, this is an inspiring book for knitters and urban art fans alike.
-Knitting magazine (UK) ― Knitting

It is part coffee-table book, with color photographs of creative bombs, and part tutorial, with tips like wearing "ninja" black to avoid capture. The book borrows from the vernacular of street graffiti and half-jokingly positions yarn bombing as an illicit alternative for knitters bored making yet another Christmas sweater. It asks readers to get off their rocking chairs and "take back the knit."
-New York Times ― New York Times

Yarn Bombing extends Stitch 'n' Bitch's approach to knitting, appealing to hipster knitters with attractive photography and irreverent patterns, reclaiming knitting as an act that is both feminist and anarchic.
-Quill and Quire ― Quill and Quire

Yarn Bombing really strives to give readers a full window into this growing movement.... No stone is left unturned (or without a cozy) in this comprehensive book.
-Craftzine.com ― Craftzine.com

Mandy Moore and Leanne Prain have written the definitive guidebook---published by Vancouver's fabulous Arsenal Pulp Press---to covert textile street art.... The kick-ass DIY patterns ensure that your attempts at transforming your own locale will move well beyond your grandma's tea cosy.
-The Georgia Straight ― Georgia Straight

There are photos on every page that will keep you entertained.... [some] are quite impressive, like a pink crocheted army tank cozy. My favourite is "The Hare," a 200-foot-long pink bunny by Vienna-based art collective Gelatin, stuffed with straw and completely knitted with wool.
-Montreal Mirror ― Montreal Mirror

Mandy Moore is co-author (with Leanne Prain) of Yarn Bombing: The Art of Crochet & Knit Graffiti (a tenth anniversary edition will be published in 2019). She has worked in the yarn craft industry since 2001, as a teacher, designer, and technical editor, as well as in retail. You can find her on Instagram and Ravelry at @yarnageddon.

Read more
Tell the Publisher!
I'd like to read this book on Kindle

4.4 out of 5 stars
4.4 out of 5
45 global ratings
How are ratings calculated?
To calculate the overall star rating and percentage breakdown by star, we don’t use a simple average. Instead, our system considers things like how recent a review is and if the reviewer bought the item on Amazon. It also analyzes reviews to verify trustworthiness.
Top reviews

Cathy A. Austin
5.0 out of 5 stars Yarn Bomb Crazy!
Reviewed in Canada on May 28, 2013
Verified Purchase
Since becoming a Pinner on pinterest and discovering the extensive world of wool around the world not just in my immediate sphere I have fallen in love with the concept of yarn bombing. This lovely book tells a great story of when, who, where, how and especially how, the basics of going out and adhering yarn in a fashion around your 'hood, your city, your world. I like the Canadian content since it is where I live and was delighted to find names and groups I knew like knitta and knitty magazine and so many more. Great photos of a variety of yarn bombings from all over, well written for the bits I have read but again, this is another new 'wool bible' I will devour in the summer with a cup of tea in hand on a lounge chair with a project bag next to me...this book has given me ideas of where to 'bomb' in my yard and my 'hood. (I have already put a small jacket on a tree on my boulevard!) Yarn bombing is like expressive and good graffiti, it makes you smile, it makes you think and improves your day! Hard core woolly people will love this book.
Read more
Helpful
Report abuse

pandaman
5.0 out of 5 stars Really good read. More than a how-to book.
Reviewed in Canada on November 8, 2019
Verified Purchase
Great book that really gets the reader involved in a really interesting art scene. Get the new, updated edition though.
Read more
Helpful
Report abuse

A Booklover
5.0 out of 5 stars Fun and Inspirational
Reviewed in Canada on December 5, 2009
This book not only includes some great examples of yarn graffiti from around the world
but also some really interesting background information on some of the artists and groups involved in this
art form. I was also really happy to see that it included step by step instructions to help beginners
start to make their own 'tags'. I loved the patterns that are included and I can't wait to try some out.
I thoroughly enjoyed this book!
Read more
One person found this helpful
Helpful
Report abuse

Brandi
5.0 out of 5 stars Fire in the Hole!
Reviewed in Canada on April 11, 2010
Being raised by "old school" knitters, I have found this book a wonderful resource for the newer generation. Fun, flirty patterns put out with exciting new concepts that are grasping new and adventurous knitters. I wonderful book for young people who want to join in the knitting community. And I simply love some of the stories of "bombs" from around the world.
Read more
One person found this helpful
Helpful
Report abuse
See all reviews

Lesley Marriott
1.0 out of 5 stars This book does not give you many patterns to follow
Reviewed in the United Kingdom on February 17, 2021
Verified Purchase
I bought this book hoping for chapters of patterns - quick and easy ones, more challenging and time-consuming ones. I found the majority of the information in the book useless to my requirements. The patterns in it are not easy to follow at all and you could spend a long time fathoming out needle sizes and how much yarn you actually need to complete a project.
Read more
Report abuse

Mandy Rose
5.0 out of 5 stars The Newb's Yarn-bombing Bible
Reviewed in the United Kingdom on June 26, 2013
Verified Purchase
I've only just started to yarn-bomb and enjoyed this book immensely. It's full of really inspirational ideas and I like the way it's presented as edgy and a bit rebellious. Beautifully illustrated and good practical advice.
Read more
Report abuse

C. S. Scofield
4.0 out of 5 stars Made us laugh!!
Reviewed in the United Kingdom on March 24, 2011
Verified Purchase
This book is full of ideas to take creative knitting to the next level. I especially liked the pattern for the camper van and the bollard covers. A genius thought up and created this book-I hope there is another one soon.
A good coffee table book to cheer you up.
Read more
2 people found this helpful
Report abuse

emcf
5.0 out of 5 stars Great book
Reviewed in the United Kingdom on February 22, 2013
Verified Purchase
Hilarious, informative and full of projects and advice! If you're interested in guerrilla knitting at all it's well worth the money!
Read more
Report abuse

fiona gilson
5.0 out of 5 stars Good information
Reviewed in the United Kingdom on July 26, 2015
Verified Purchase
Good thorough book to get me started. Covered every aspect.
Read more
Report abuse
See all reviews
Back to top
Get to Know Us
Make Money with Us
Amazon Payment Products
Let Us Help You
EnglishChoose a language for shopping. CanadaChoose a country/region for shopping.
© 2008-2021, Amazon.com, Inc. or its affiliates