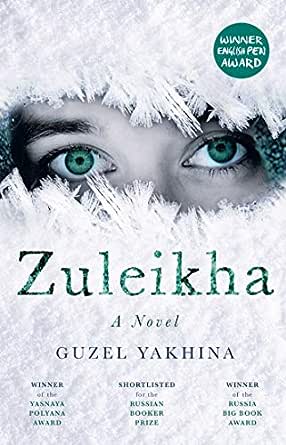 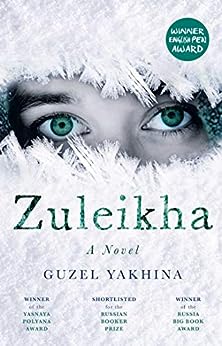 ‘A powerful account of individual lives trapped in one of the greatest tragedies of the 20th century.’, The Times

‘Yakhina’s prose can be exquisite, especially in sequences such as the one where Zuleikha watches prisoners escaping from the train… It is Zuleikha’s perspective and the way in which she adapts that capture our attention. The unexpected birth of a son.. and her transformation from a passive to a powerful protagonist is one of the joys of Yakhina’s work.’, Financial Times

‘Written in a rich and highly visual prose... Zuleikha's story is one of injustice and pain, but also of a woman's emancipation and renewal.’, Associated Press

‘As we watch its heroine’s existence devolve from an oppressive domestic servitude into something disastrously worse, Guzel Yakhina’s sprawling, ambitious first novel Zuleikha reminds us just how brutal the Soviet system was… Zuleikha does an admirable job of dramatizing a historical period rapidly receding into the forgotten past… Dramatic and eventful, Zuleikha sweeps us into a distant era.’, New York Times Book Review

'An intimate story of human endurance.', The Calvert Journal

‘While many writers have attempted to comprehend Soviet history's darkest moment, Yakhina finds a way to make it new.’, Russia Beyond the Headlines

'It is 1930 in the Soviet Union and Josef Stalin's dekulakization programme has found its pace. Among the victims is a young Tatar family: the husband murdered, the wife exiled to Siberia. This is her story of survival and eventual triumph. Winner of the 2015 Russian Booker prize, this debut novel draws heavily on the first-person account of the author's grandmother, a Gulag survivor.', The Millions, 'Most Anticipated Books of 2019'

‘This is a powerful Russian saga, giving an immense overview of life under communist rule... This author is a master at painting an image of the world as it was then.’, Marjorie's World of Books, blog review

‘Zuleikha has an energy that is hard to resist.’, Strong Words --This text refers to an alternate kindle_edition edition.

Guzel Yakhina (b. 1977 Kazan, Tatarstan) is a Russian author and filmmaker of Tatar origins. She graduated from the Kazan State Pedagogical University and completed her PhD at the Moscow Filmmaking School. Zuleikha is her first novel. --This text refers to the audioCD edition.

4.4 out of 5 stars
4.4 out of 5
75 global ratings
How are ratings calculated?
To calculate the overall star rating and percentage breakdown by star, we don’t use a simple average. Instead, our system considers things like how recent a review is and if the reviewer bought the item on Amazon. It also analyzes reviews to verify trustworthiness.
Top reviews

There are 0 reviews and 2 ratings from Canada

Geoff Crocker
5.0 out of 5 stars Officialdom vs Humanity, Russian style
Reviewed in the United Kingdom on April 10, 2019
Verified Purchase
Guzel Yakhina writes a gripping story. Her characters are deeply drawn. Her descriptive prose is captivating. The historic context of persecution of Kulaks in post-revolutionary Russia is fascinating. Her partly researched and partly imagined descriptions of harsh primitive agricultural Tatar culture, and of human community in a forced labour camp in arduous conditions, are compelling.

Murtaza is the hardy Islamic Tartar farmer dreadfully mistreating the young Zuleikha, Ivan Ignatov is the young revolutionary capable of sensitive thought, but compromised to the system by persuading himself that Kulaks really are the ‘enemies of the people’, Kuznets is the cynical gangster party boss, Gorelov the duplicitous base criminal who gains power. The rest of Yakhina’s cast are decent, gifted, gracious people, deported and imprisoned for their class. This may seem a rather fanciful binary divide between virtue and vice, but is a relevant comment on Russian society which still today is often characterised by hostility in the public domain, and warm friendship and human virtue in the private domain. Yakhina is optimistic in letting virtue prevail. Let’s hope she’s right.

M. Beaver
4.0 out of 5 stars Almost excellent
Reviewed in the United Kingdom on June 8, 2020
Verified Purchase
I am addicted to Russian literature, overwhelmingly that written by dead men. Zuleikha, on the other hand is the work of a young woman and was only published in Russian in 2015.
It began life as a film script before being worked into a novel, and it reads like it, being made up of a whole series of highly visual scenes. It is also the author's first novel, and occasionally reads that way too with a certain 'clunkiness'.
What it lacks in conveying the visceral and intellectual brutality of Stalin's Russia as portrayed by Grossman or Shalamov for example, it makes up for in the development of the emotional lives of many of the characters, and I would be surprised if any man could write as well about childbirth as Yakhina does.
I can't speak or read Russian. But nonetheless I found Lisa Hayden's translation increasingly annoying as the book went on. While it is always highly readable and creates real page-turner, it occasionally uses phrases that are profoundly American and don't ring true as the sorts of things that a Russian would say or write. These jar.
Another criticism is of the cover which makes the book look like a piece of chick-lit, which it most definitely is not.
Read more
Report abuse

Mrs. D. A. Spalding
5.0 out of 5 stars Zuleikha
Reviewed in the United Kingdom on July 14, 2019
Verified Purchase
This was a most fascinating book, written in the times of the onset of communism. It tells the story of a peasant woman who, after her peasant farmer husband ( known as a kulak), was shot dead, she was transported with others to Siberia to set up a settlement. I found it very difficult to put this book down.
Read more
One person found this helpful
Report abuse

torielle
1.0 out of 5 stars Damaged
Reviewed in the United Kingdom on July 12, 2019
Verified Purchase
I bought this for my mother. It arrived damaged - see photo. As she is elderly she cannot get to a post-office to return it. We were both disappointed.
Read more

1.0 out of 5 stars Damaged
Reviewed in the United Kingdom on July 12, 2019
I bought this for my mother. It arrived damaged - see photo. As she is elderly she cannot get to a post-office to return it. We were both disappointed.
Images in this review

Marcela de Montes
5.0 out of 5 stars One of the best contemporary Russian novels I have read
Reviewed in the United Kingdom on May 10, 2019
Verified Purchase
Excellent
Read more
One person found this helpful
Report abuse
See all reviews
Fast, FREE delivery, video streaming, music, and much more
Prime members enjoy Free Two-Day Shipping, Free Same-Day or One-Day Delivery to select areas, Prime Video, Prime Music, Prime Reading, and more.
> Get started
Back to top
Get to Know Us
Make Money with Us
Amazon Payment Products
Let Us Help You
EnglishChoose a language for shopping. CanadaChoose a country/region for shopping.
© 2008-2020, Amazon.com, Inc. or its affiliates